This event has now passed. 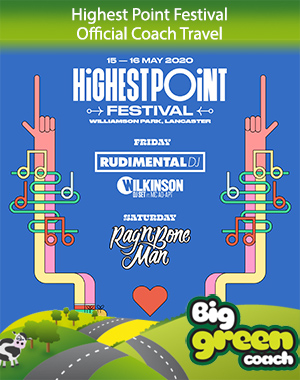 Please follow this link to see the latest statement from the festival organisers:
https://www.facebook.com/highestpointfestival/

We are taking our coach services off sale for now but will be back to support the festival when the new dates are announced.

Thanks for your continued support...

Big Green Coach are delighted to be the official and exclusive ticket and coach travel partner to Highest Point Festival 2020.
Choose day return coach travel on either Friday 15th or Saturday 16th May from: Blackburn, Blackpool, Bolton, Carlisle, Kendal, Liverpool, Manchester, Preston and Wigan. Book your coach seat with or without a festival ticket.
Rag 'N' Bone Man, Rudimental and Wilkinson each set to make their Lancashire debut this summer at the region's biggest music festival, Highest Point.
First wave of weekend headliners announced with more than 100 more artists to follow.

Following a hugely successful 2019 weekender, Highest Point will return to Williamson Park in Lancaster from the 15th and 16th May 2020.

The first artist announcement sets an impressive tone for what will be one hugely diverse fun-filled musical weekend as London drum and bass collective Rudimental and dance music heavy weight Wilkinson lead the charge for Fridays DJ line-up while Saturday's activities will be in for giant reception headlined by Brit award-winning singer Rag 'n' Bone Man.

Having graced some of the biggest Festival stages around the world Highest Point Festival will see the debut performances of both DJ's and be the very first time the powerful voice of Rag'n'Bone who is responsible for chart-topping singles Human, Giant and Skin has been heard live in Lancashire.

Last year 15,000 people attended​ the festival that alongside standout production featured a variety of world class artists including Sister Sledge and The Zutons across the three days, with the Lancaster crowds also treated to a spectacular array of music, arts, performances and food and drink offerings.
NO EXPENSIVE HOTELS
NO LEAVING EARLY TO CATCH THE LAST TRAIN

NO FINDING WHERE YOU PARKED AFTER A DAY OF PARTYING

All coaches are timetabled to arrive in plenty of time before the show and to depart after the action has ended. Let Big Green Coach take you to the gig and back home again, stress free.