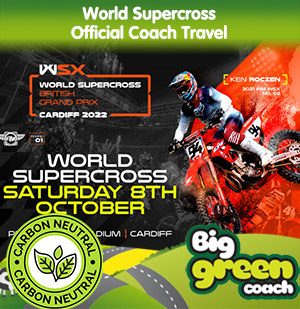 Big Green Coach is delighted to be appointed as the official coach travel partner to the World Supercross event at Principality Stadium, Cardiff.
*100% refundable coach ticket if you choose the "Flexi ticket" option during booking.
All Big Green Coach coach services to this event will be carbon neutral!
Choose your return coach seat from:
Birmingham, Bristol, Cheltenham, London, Reading, Swindon and Worcester.
Skint? No worries, book the coach element for £10 and pay the rest off in 2022.
Cardiff to host first ever World Supercross British Grand Prix
Cardiff will host the first ever World Supercross British Grand Prix later this year, with the sport's biggest stars set to light up Principality Stadium on Saturday 8th October.
The sport of supercross is intense dirt bike racing in a stadium environment and combines the adrenaline-fueled action and jaw-dropping jumps with live music, freestyle motocross stunts, and awe-inspiring pyrotechnics, making it a perfect family night out.
While there are popular domestic championships across Europe and standalone events in cities such as Paris, France, and Herning, Denmark, the World Supercross Championship has historically taken place in the United States.
However, in 2022 a new era of World Supercross Championship finally goes global and will pit the best riders on the planet against each other in stadiums across the globe, including the likes of championship favourite and international superstar Ken Roczen, Cole Seely, Justin Brayton and 40 of the world's best athletes. And with the UK the birthplace of motocross racing, having the first round of the championship take place in Britain is a fitting appreciation of the sport's history.
On Saturday 8th October Principality Stadium will be transformed into the ultimate dirt bike battlefield for one epic night of unmissable action and intense competition racing, with 10 teams and 40 of the best riders from across the globe doing battle for over US$250,000 in prize money and international supremacy.
NO EXPENSIVE HOTELS

NO LEAVING EARLY TO CATCH THE LAST TRAIN

NO FINDING A PARKING SPACE AROUND THE STADIUM

NET ZERO FOR CARBON
All coaches are timetabled to arrive in plenty of time before the main show and to depart after the action has ended. Let Big Green Coach take you to the gig and back home again, stress free.